Our Palram Greenhouses were recently used on Masterchef Australia. Contestants had 7 hours to work in teams to build an edible art installation in the “specially constructed greenhouses”.

There is a video of the Masterchef Greenhouse episode available on the channel 10 website, here:

Greenhouses are something everyone who is interested in gardening will enjoy. Being able to propagate plants in controlled conditions, to grow your own vegetables and flowers without having to contend with birds, animals and pests will give much better results for your efforts. Interested in how to build a greenhouse? – the kitform polycarbonate greenhouses such as the SILVER LINE units are an easy, neat and economical solution.

We make it even easier for you – at Landera we offer FREE DELIVERY to your address in Australia on all greenhouse products shown below AND our 30 day MONEY BACK GUARANTEE if you aren’t happy with the product! Simply send back to our Melbourne warehouse for a full refund.

Click to expand and read more about our greenhouses

SILVERLINE polycarbonate plastic greenhouses by Palram range in size from the SINGLE COLD FRAME right through a range of mini greenhouses to the AMERICANA 12 x 12 GREENHOUSE, and cater for every situation, including small courtyards, patios and balcony gardens.  The robust aluminium extrusion greenhouse frame and the virtually unbreakable polycarbonate plastic glazing are designed for long, trouble-free lifespan. High quality, ease of assembly and very competitive pricing are the benefits that make them one of the most popular ranges of polycarbonate greenhouses on the Australian market.

See why polycarbonate is widely used instead of glass in greenhouses these days.

Like to know more about plastic greenhouse/hot house products and their use? Go to Landera Blog and search ‘greenhouse’ for more information and related articles. Or you can find a great range of books relating to the setting up and operation of your greenhouse by searching ‘greenhouse gardening’ at online stores such as Book Depository.

Greenhouses are becoming more widely used, not only because many people prefer to grow their own vegetables and flowers, but also they are finding gardening a great way to unwind.  Large garden spaces are often not available and greenhouses are proving an excellent way of increasing crop yields in small areas.

Greenhouses have been in use for at least 2000 years. The earliest examples of course were not anything like the polycarbonate plastic greenhouses available today, but the basic concept was the same. They need to provide an environment which protects plants from the extremes of cold and heat, winds and the damage caused by various pests. Greenhouses are also used to extend a plant’s growing season and even to enable a gardener to grow non-native plants which would not survive in the open.

One of the first known examples of a greenhouse was the specularium constructed for the Roman emperor Tiberius who was advised by his physicians to eat a cucumber every day. This greenhouse apparently featured stone walls and a translucent roof which was made from small pieces of mica to let in the sunlight. Heating was provided by fires burning against the outside of the stone walls.

The modern greenhouse concept was developed in the 1500s by botanists and collectors interested in propagating exotic species of plants discovered by explorers. An early greenhouse with glass roof and walls was built in Holland by the French botanist Jules Charles who wanted to grow tropical plants. 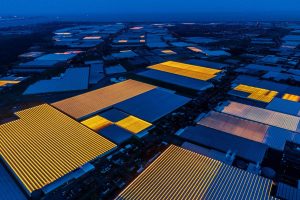 (The Netherlands has certainly maintained and expanded this tradition – huge areas of land are covered by greenhouses and hothouse vegetables and flowers are grown in enormous quantities; if you look at The Hague, Netherlands on googlemaps.com you will see that almost half the city is made up of commercial greenhouses. Visitors to The Hague notice the glow in the night sky of lights which are left on to assist plant growth).

During the 1600s glasshouses became fashionable with the aristocracy in Europe, and increasingly elaborate and expensive examples where built in various places. The orangerie at the Palace of Versailles constructed during the reign of Louis XIII was over 150 metres long, 12 metres wide and nearly 14 metres high. Of course, the immense cost of such a project was of no consequence to the king, but as glass was very expensive in those times greenhouses were strictly a luxury item for the very wealthy. 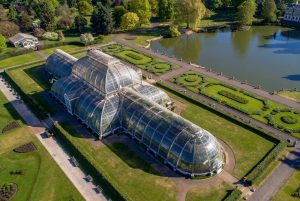 By the mid 1800s glass was being produced in large quantities and the cost was greatly reduced. Glasshouses became more common and some amazing examples were built. One which still stands is the Palm House in the Kew Gardens. This took 4 years to build and was completed in 1848. It featured an iron framework with open spaces free from pillars and utilised design concepts based on shipbuilding, which was also undergoing the radical change from wooden construction to iron.

Since then design and construction has evolved, and these days greenhouses are readily available in a wide range of types, sizes and price ranges. The frame construction, traditionally using timber, has moved through steel to extruded aluminium sections. Nowadays, glass is often replaced with plastics such as polycarbonate which has excellent light transmission qualities and is virtually unbreakable.

Below is our Standard Greenhouse range, with a 5 year warranty and many size options

Below is our Premium Greenhouse range with many features included as standard. 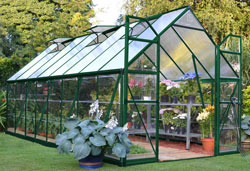 Get $40 off any Greenhouse Lowest price guaranteed! Minimum spend $650